Lot of photos of St. Elmo Castle and the history, since it was just a watchtower, in 10 century A.D. to the present day. 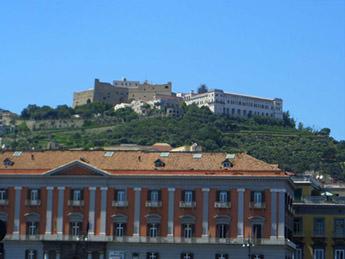 The sant' Elmo castel is a medieval fortress. It's located on the Vomero hill. Precisely in largo San Martino. From this square there is a breathtaking view of the city of Naples and his Gulf.

On the wall of the castle above the drawbridge there is the Royal Arms of Charles V of Habsburg king of Naples from 1661 to 1700: The Hasburg double-headed eagle.

The firsts historical references of the castle date back to 1275 C.E.. Do not know the date of construction, but during the period of Norman domination (1137 C.E.- 1194 C.E.), they built a tower called Belforte on the top of the church of St. Erasmus of the X century.

This place was chosen because it was the highest point in all city. From there it was possible to overlook the entire golf of Naples. So it was possible avoit enemy attacks.

In 1325 Charles I of Anjou has decided to expand this tower.

In 1343 The works were completed, becoming a real square fortress.

Later the castle was besieged several time by French and Spanish for contending the kingdom.

During the Spanish Vice-Kingdom, between 1537 and 1547 C.E. the castle was rebuilt and expanded. Taking the appearance that we can see now: 5-pointed and placinf on the wall above the drawbridge the Royal Arms: The Hasburg double-headed eagle.

In this period the name of the castle was changed. At the beginning the name was St Erasmo, then St Ermo and then finally to St Elmo.

Between 1599 and 1610 C.E. it was again restored again: a bolt of lightning struck the church, the military quarters and the castle building.

From that moment untill 1952 The castle was a prison.

In 1982 it was given to the Superintendency for Artistic and Historical Heritage of Naples.

Now in the castle there are exhibitions and events.

It's possible visit the parade ground where there's a splendid breathtaking view of the city of Naples, his Gulf and the islands of Capri, Ischia and Procida.