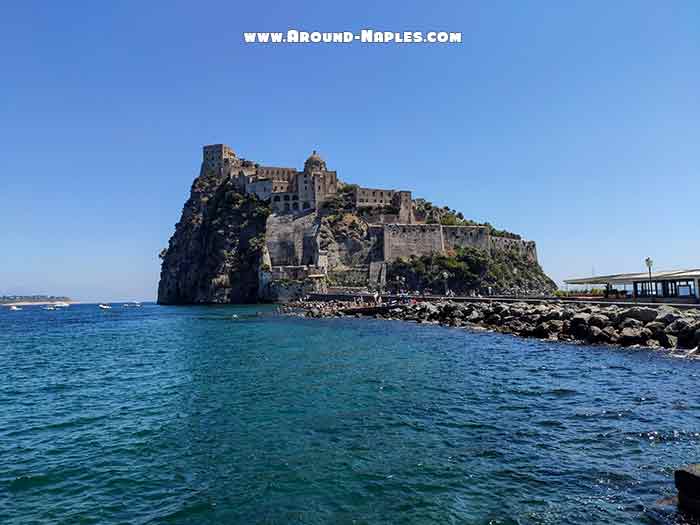 The the aragonese castle of Ischia

The Ischia Castle is a fortress built upon the litle Islet large approximately 66,900 square yards and 370 feet above sea level.
It is made up of magmatic rock and it was formed after the eruption of about 300,000 years ago. The islet is connected to the Ischia Island by a little bridge: Ischia Ponte. 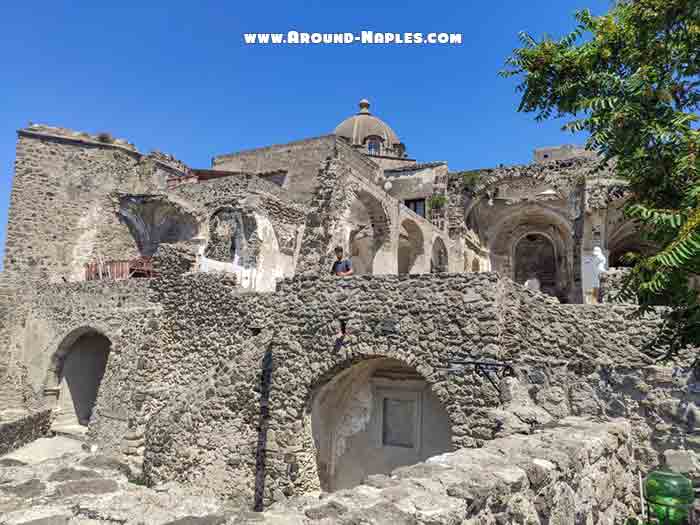 The Ischia castle was not just a fortress, but it was a real Medieval town, a small villages with houses, churches and areas dedicated to cultivation, in other words there was everything people needed. The citadel often became a war shelter and the inhabitants of Ischia Island took refuge inside his walls when conquering peoples tried to occupy the island. 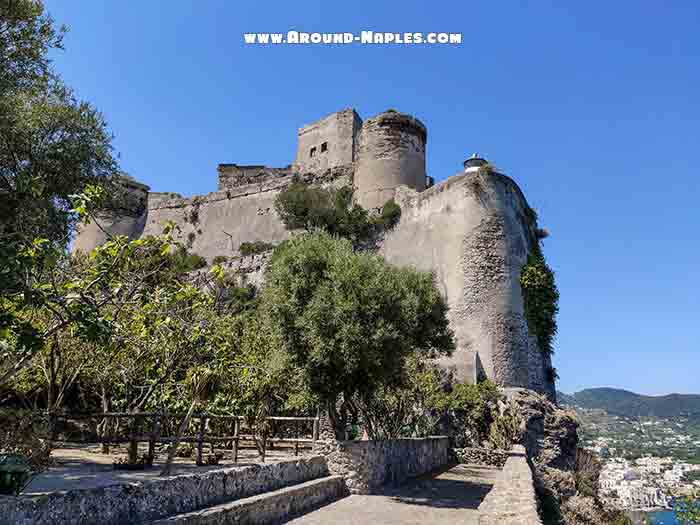 The Ischia castle seen from the terrace of the olive trees

The Ischia castle has often been conquered, with the whole island, a lot of time by many foreign peoples. First of all it was Rome that conquered it in the 4th century AD (CE), later until the twelfth century A.D. the Visigoths, the Vandals, the Ostrogoths, the Arabs, the Normans and the Swabians.
In the thirteenth century first the Angevins and then the Aragonese, after conquered the island of Ischia, they did a radically change of the shape of the fortress, making the appearance similar to what we see today ... more info by scrolling the page.

Ischia (Italy) and the aragonese castle: the landscapes 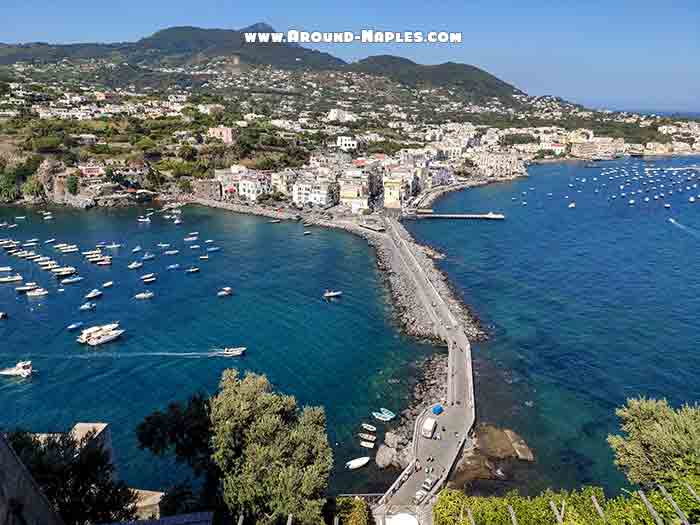 The Aragonese castle of Ischia offers an incredible panorama from various points of the citadel. From the terrace of the Immaculate Conception and from the Convent viewpoint it is possible to admire the Ischia island, while to be able to enjoy the view of the islands of Capri, Vivara, Procida and the city of Naples you have to go to the terrace of the Olive trees, a truly magical place .. .more info and photos by scrolling the page.

Ischia castle, ticket price and location of the fortress

How much does the entrance to the Aragonese castle cost?

FREE TICKET (children up to 9 years)

How to reach the castle of Ischia by public transport:

To reach the Aragonese castle of Ischia by Google Maps

The Aragonese castle of Ischia, the story of a fortress

The Ischia Caslte, precisely the first building of the fortress was built in 474 BC. by the Greek Hiero I (tyrant of Gela and Syracuse), who helped the Cumaeans during the 2nd battle of the Greek colony of Cuma : a naval battle against the Etruscans (also called Tyrrhenians), who wanted to conquer their lands. After chased out the invaders, Hiero I obtained the entire island of Ischia as a reward, including the islet where the Aragonese castle was built.

Castle of Ischia settled many times by several peoples

The castle of Ischia since the fourth century. AD (CE) was often attacked and conquered by foreign invaders, in 315, after the Samnite wars, Rome conquered the city of Cuma and the entire Campania region, including the island of Ischia, on which the Romans founded the city of Aenaria and at that time the castle of Ischia was a small fort for the defense of the island. Houses with high towers were also built for sighting enemy ships. Later the island of Ischia was conquered and sacked by: barbarians, goths, vandals, Normans, Swabians and Angevins who one after another changed the original appearance of the fortress. And every time a new invader attempted to conquer the island, the inhabitants always took refuge inside the walls of the fortress and its citadel.
In 1301 there was the eruption of Mount Epomeo, the volvano of Ischia, which prompted the inhabitants of Ischia to take refuge within the walls of the fortress, a safer and more peaceful place, thus a real settlement took place within the walls of the castle, forming a real town.
Later during the occupation by the Aragonese, the castle was further modified by Alfonso I of Aragon, reaching the shape we see today: a quadrangular shape with four towers. They created an artificial bridge to connect the islet to Ischia, the walls of the entire fortress were fortified and they also created several machicolations, that is, holes in the wall from which boiling water or molten lead was dropped against any enemies.
At that time a citadel was built by Aragonese, a real small town, capable of hosting most of the Ischitans to protect them from continuous attacks by pirates.

The Castle of Ischia and the important historic people.

At the end of the 16th century, 1892 families lived in the castle, there was the convent of the Poor Clares, the bishop with the chapter, an abbey of the monks, 12 churches, a cathedral and the prince with the garrison.

In the first half of the 1500s there were some artists who stayed inside the castle. Some of them are Ludovico Ariosto and Michelangelo Buonarroti (known best as simply Michelangelo).

Later, around 1750, the inhabitants of the castle moved to live on the island of Ischia. Now safer because for the moment there were no more attacks from conquerors.

In 1809 there was an invasion by the British who attacked the castle with cannon shots. The fortress was almost completely destroyed.

In 1823 Ferdinand I, king of the 2 Sicilies, brought the last 30 resident families out the castle, so he turned the fortress into a life sentence. Later, in 1851 he turned again. It was converted into a political prison for conspirators against the kingdom.

In 1861 there was the union of the kingdom of Italy with the island of Ischia annexed to it. So the political prison was suppressed.

Social share
Save
Cookies user preferences
We use cookies to ensure you to get the best experience on our website. If you decline the use of cookies, this website may not function as expected.
Accept all
Decline all
Read more
Analytics
Strumenti utilizzati per analizzare i dati di navigazione e misurare l'efficacia del sito per capirne il funzionamento.
Goole Analytics
Accept
Decline