Piazza Plebiscito and its surroundings, photos and tips

Around Piazza del Plebiscito (Plebiscite square), many photos and tips for visiting the royal palace of Naples, the Egg and New castel, and much more...

Piazza Plebiscito and the Royal Palace of Naples

The Royal Palace of Naples in Piazza Plebiscito.

In Piazza del Plebiscito one find the royal palace, commissioned by Fernando Ruiz de Castro, Spanish viceroy of the kingdom of Naples, who in 1600 decided to built a royal palace in honor of the King of Spain, Philip III of Habsburg. The appearance of the royal residence was often modified, even during the Bourbon domination.
Info, tickets and timetables on beniculturali

How to reach the Royal Palace of Naples:

by public transport: underground line 1 and get off at "Toledo station" or "Piazza municipio station" 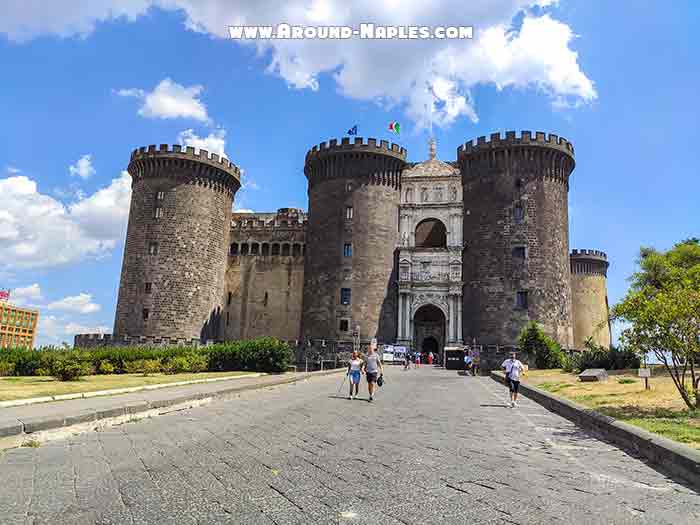 The Castel Nuovo, also called Maschio Angioino, was commissioned by Charles I of Anjou in the thirteenth century. A.D. (CE) and it is one of the most important monuments in the city of Naples.
Info and booking on the website of the municipality of Naples

How to reach the Castel Nuovo:

by public transport: underground (Tube) line 1 and get off at the "Piazza municipio" 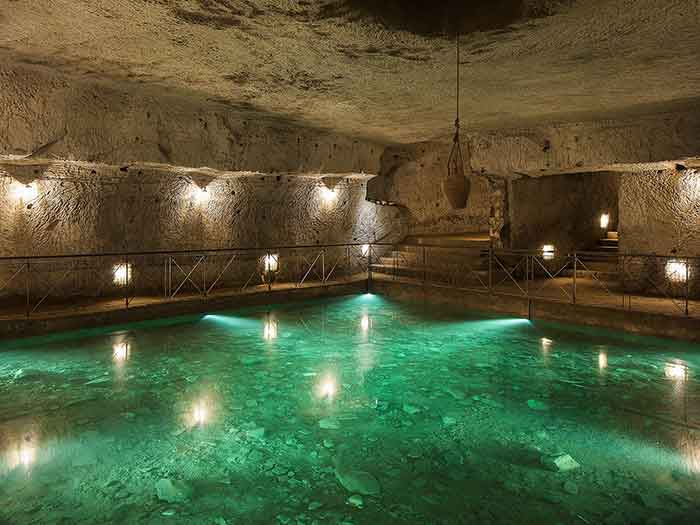 In 1853 Ferdinand II of Bourbon wanted an underground connection from Piazza Plebiscito, one time Largo della Reggia, to Vittoria square (Piazza della Vittoria), a tunnel under the Pizzofalcone mountain.

How to reach the Bourbon tunnel:

by car open Google Maps to reach "Morelli car park" where you will find the entrance of the Bourbon tunnel.

by public transport: underground (Tube) line 1 and get off at the "Toledo station" to reach Vico del Grottone, 4 (behind Piazza Plebiscito), then click here to open the Google Maps and walking for 1 minute to reach the entrance of the Bourbon tunnel.

Piazza Plebiscito: the basilica of st. Francis of Paola 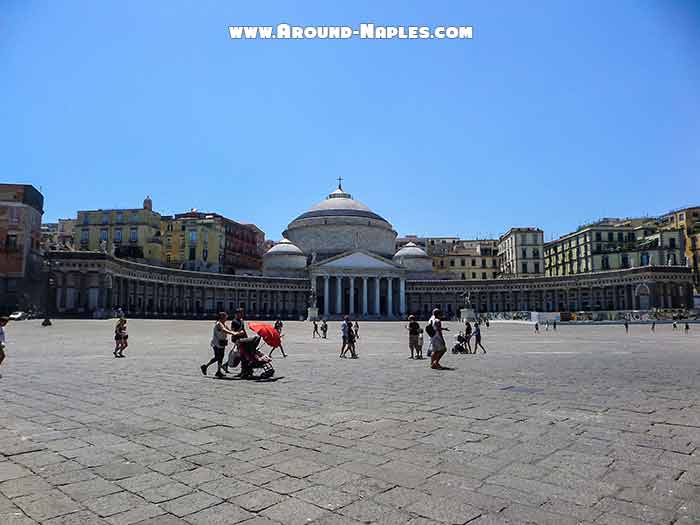 Piazza Plebiscito and the basilica of st. Francis of Paola

In Piazza Plebiscito one find the basilica of Francis of Paula wanted by Ferdinand of Bourbon, after the Congress of Vienna in 1815, and after his retourn to the throne of the kingdom. So he decided to built a church to thank St. Francis of Paula, to whom he was very devoted. The works began on June 17th, 1816 and ended in 1846. The style and shape is the same of the Pantheon in Rome. The church has a peculiarity: it was the first church in Naples with the altar facing the faithful.

How to reach the basilica of St. Francis of Paula:

by public transport: underground line 1 and get off at "Toledo station" or "Piazza Municipio station".

Naples Underground , the Bourbon Tunnel with a set of galleries dug for millennia until the Second World War to extract tuff to building construction.
In 700 these tunnels were used to transport water. In fact, during Roman times, in Naples there was already an aqueduct. Each house courtyard was equiped with a water well.

It is one of the gallery of "intesa san Paolo" bank museum complex, in via Toledo, 185. Since 22th May 2022 the exposition will move definitely location to the building next door in via Toledo, 177. Here it is possible to admire one of Caravaggio's works: the "Martyrdom of St. Ursula". Other works by Caravaggio in the city of Naples are the "Seven Works of Mercy" exhibited at the "Pio Monte della Misericordia" museun and "The Flagellation of Christ" at the Capodimonte Museum.

How to reach the Zevallos Palace: 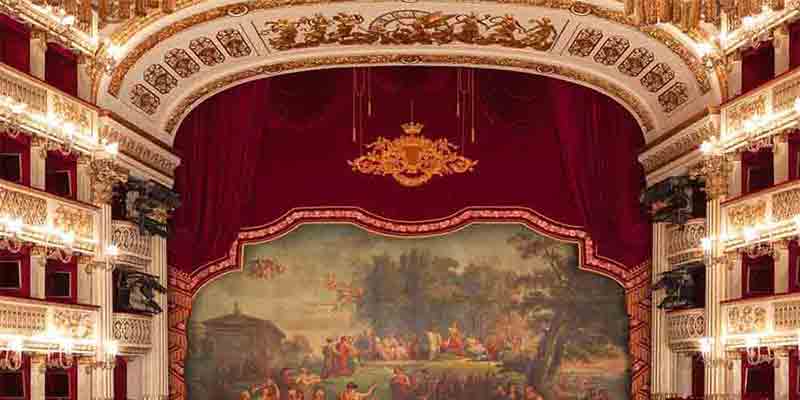 The royal theater st. Charles is located in the Royal Palace building, but the entrance is in front of the Umberto I gallery, in via San Carlo, 98.

The Royal Theater of st. Charles is one of the oldest in Europe, commissioned by the King of Naples Charles of Bourbon and it was inaugurated the day of his name day, November 4th, 1737, from which it took its name. The theater building is the continuation of the Royal Palace of Naples. In fact, the royal family went to the auditorium trough an internal passage.

How to reach the San Carlo Theater in Naples:

The Umberto gallery 1st in via Toledo. Attenzione!!! zona pedonale

The Umberto gallery 1st was built during the Neapolitan renovation, between 1887 and 1890.
In that period the whole area of Santa Brigida was in an advanced state of deterioration. There used to be a lot of crime in this neighborhood and the hygiene situation was very bad to the point that there were even cases of cholera. So a rehabilitation law was passed in 1885. Some buildings were therefore, demolished and a gallery covered by a glass dome was built with 4 exits on the streets of "San Carlo" avenue, Toledo avenue, "Santa Brigida" avenue and "Giuseppe Verdi" avenue.

How to reach the Umberto 1st gallery in Naples:

Which district of Naples do you want to visit today?
As below you will find some images and, with a simple click or touch, you can reach a web page that, in addition to being full of photos and tips, will show you the beauty of that specific neighborhood. By doing so, when you organize a trip to Naples, you will not move continuously from one part of the city to the other.

Historic Center of city of Naples

The Vomero hill of city of Naples

The Posillipo hill of city of Naples