Palace of Caserta, the history of royal Bourbon residence.

The history of the Charles I of Bourbon's royal residence, since its construction to the present day.

The royal palace of Caserta

The palace is 61 thousand square meters with four internal courtyards. More than 40 meters high and spread over: 5 floors, 2 of which are underground.

The statue of Hercules

The statue comes from one of the Farnese villas in Rome. The work was probably made by the Athenian sculptor Gliconius.

The royal palace of Apollo

The staircase of honor

The 3 statues of the grand staircase. From left: Merit, a young man crowned with laurel, the Royal Majesty, King Charles of Bourbon and finally the Truth who, with her light, lights up even invisible things.

Royal Palace of Caserta, how to get there.

The fontain of Venus and Adonis

The Royal Palace of Caserta: included in the UNESCO World Heritage

The Royal Palace of Caserta, the majestic palace with its beautiful gardens, is among the largest royal residences in the world. Since 1997, has been included in the UNESCO World Heritage Site. 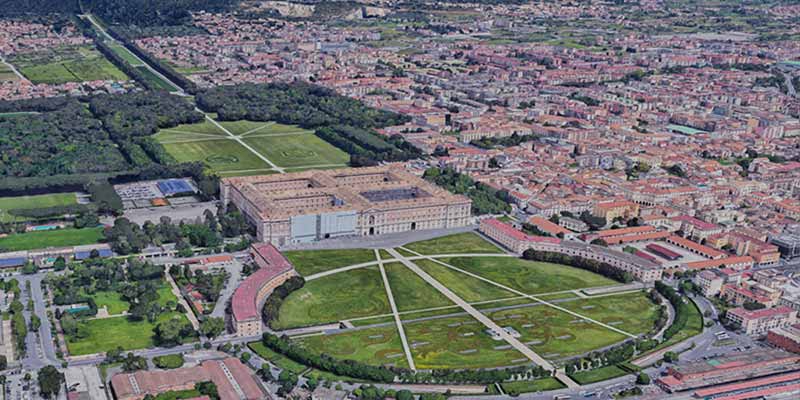 Palace of Caserta, the characteristics and dimensions.

It is located in Caserta, a city about 25 km north of Naples.
The palace was built in Baroque style. The building has 5 floors, 1200 rooms with an area of about 47,000 m². It has a rectangular shape and it continues inside forming a cross and 4 large courtyards with an area of about  3.800 m² each one.
In some drone photos we can see spectacular and breathtaking images, because the whole complex (palace and garden) has an huge violin shape. (Source photo: Casertaweb)

The image Gallery of the royal palace of Caserta.

The fresco of throne room: Groundbreaking for the construction of the

Charles of Bourbon, King of Naples (1716-1788), wanted a beautiful residence as much as the French of Versailles, he then gave the task to realize it to the architect Luigi Vanvitelli, who started the works in 1751. His successor to the kingdom of Naples was his son Ferdinand IV of Bourbon, who continued the work. Luigi Vanvitelli worked on it for years, until his death in 1773.
From that moment there were other architects who continued the work on the Royal palace of Caserta, among them Carlo Vanvitelli, son of Luigi. It was then completed by the architect Gaetano Genovese in 1848.
It took almost 100 years to complete it. But the Royal palace of Caserta was inhabited since 1780.

The Royal Palace of Caserta and Parthenopean Republic

In 1799 the Parthenopean Republic was born, so the Royal palace of Caserta and other properties were expropriated to the Bourbons. Many works of arts, precious objects and valuable furniture were also stolen.

In 1806 Napoleon Bonaparte conquered the kingdom of Naples and he made his own brother, Joseph, the King of Naples, who made the royal palace of Caserta his new residence.

In 1808 Napoleon also conquered Spain, who needed a new sovereign. Napoleon's brother then left the kingdom of Naples for the Spanish one.

Napoleon made General Gioacchino Murat (his brother-in-law) the new king of Naples who also chose to reside in the majestic palace of Caserta.

In June 1815 Napoleon was defeated at Waterloo. There was also the Congress of Vienna (a meeting between the major European powers to restore the ancient regime of the Valois and the Bourbons).  So the kingdom of the 2 Sicilies was born and the power was given to the Bourbon family. New King was Ferdinand I (former king of Naples: Ferdinand IV of Bourbon). In this period most of that was stolen during the Parthenopean Republic was recovered.

As below you'll find some YouTube videos, virtual tours on Google to see royals apartments, gardens of <strong>Royal Palace of Caserta